Start typing and press
Enter to search
Skip to content

We (the Captain Crunch Colloquium here at CrunchFacts) received through our “Any Crunchy Questions” section a request from one Pete Pops: “Can you write an article covering the ‘I’m gonna munch, I’m gonna crunch’ vine and other examples of contemporary media inspired by the Cap’n?” Well Pete, you couldn’t have been any more timely in your request; as I sat watching an episode of “Twin Peaks” earlier in the week, I noticed in the background a box of Captain Crunch, retro cover and all. This distracted me from the foreground to the point that I had to stop and take a breather–to reorganize my thoughts, and to shift my attention back to the foreground. I had a similar (though significantly worse) article in the works, but your fantastic question has inspired me further–and for that I thank you, Pete Pops.

To begin, I must address your first topic of interest: the “I’m gonna munch, I’m gonna crunch” vine. This vine, unfortunate as it may be, is not directly inspired by Cap’n Crunch; instead, it finds its roots in the eighth world of a game that I have nothing but love for, “Banjo Kazooie.” 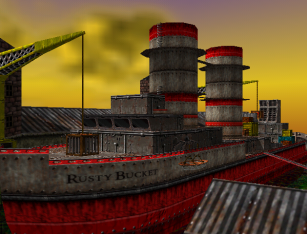 Still, the fact that Pete would make the assumption that this vine was directly inspired by our beloved Horatio and his delectable array of cereal products speaks volumes on the impact that Cap’n Crunch has had on popular culture. The simple mention of the word “crunch” no doubt brings thoughts of the Captain to the forefront of one’s mind; furthermore, I would be remiss, as a member of the Captain Crunch Colloquium, to not give our collective opinion on the matter: while it is unlikely that the vine took direct inspiration from our beloved breakfast cereal, who is to say that the creators of “Banjo Kazooie” were not avid lovers of Cap’n Crunch themselves?- and that their love did not seep into their game in the form of this voice line?

Pete’s first question answered, I now move on to Cap’n Crunch’s general influence on contemporary media. Family Guy, in a play both on our beloved cereal and Coppola’s masterwork “Godfather,”  has Horatio speaking out (to put it lightly) about slanderous remarks that Cap’n Crunch cereal cuts up the roof of one’s mouth. Admittedly, when I was younger, this was the case; but, as an older man, I thankfully seem to no longer have this problem.

Our favorite cereal–and Jay Z’s too!

The Cap’n Crunch twitter account was quick to respond, coining the hashtag #magnacartaholycrunch. Jay Z isn’t the only rapper out there to have come out and stated their love for the Captain; MF Doom and Czarface, on their joint project, Czarface & MF Doom, have two songs in honor of the delectable cereal: Captain Crunch and its remix, Captain Brunch. RZA, in an interview with BlackTree TV, speaks on his love for the cereal growing up and even mentions that he had a bowl that morning: clearly, rappers, much like all of you reading this, have great taste in cereal.

My favorite (and probably the most literal instance of Cap’n Crunch being seen in contemporary media) moment would have to be the infamous rank debacle. This detail had gone unnoticed for years before a professional sleuth uncovered and broke the news; that Captain Horatio Magellan Crunch was but a Commander, not a Captain. 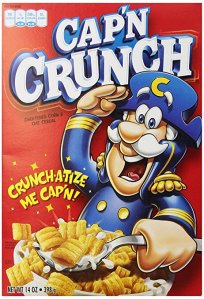 Captain Crunch’s sleeve insignia is that of a Commander (3 stripes), not a Captain (4 stripes).

Users on Twitter were on either side of the divisive issue, but they were not alone in their interest in the event; the United States Navy also got in on the action, as did a multitude of news outlets.

An overjoyed newsman praising Horatio’s response to the revelation

The situation resolved itself shortly after it started, with the Official Captain Crunch YouTube channel posting a response that, unfortunately, is no longer on YouTube, outside of its presence within CNN’s coverage of the scandal. In the video, Horatio quickly deflects all criticism by simply highlighting the other absurdities of his character and portrayal. The Captain would also further defend himself by insisting that he was, indeed, a Captain, for he captained the S.S. Guppy (his ship) and his crew.

To Pete Pops and all of my lovely readers, I hope you find yourselves newly enlightened by the presence of the beloved Captain in contemporary media. I certainly have not covered every instance of his influence and involvement, but I hope that those which I have selected to retell here show well enough the power of the Crunch.

Steve Binder is the mind behind Binder and Binder Law Associates. It was there that he met and hired lifelong friend Michael Feinstein. Steve Binder is the crunch-of-all-trades in this project. From being able to speak Crunchling, to perfecting over 95% of Crunch's secret recipes, Binder's knowledge has been key to the overwhelming success of this study.