Start typing and press
Enter to search
Skip to content

I offer my deepest apologies to the scientific community for my prolonged period of silence. I fear that I may have delved a bit too deep into the essence of Crunch in my recent research, which has necessitated a sudden restructuring of my research unit which now includes a new division exclusively for creating data charts. For the foreseeable future we will be focusing our efforts on Crunch observable from our own plane of existence. You’ll forgive me for my past foolish ambition.

In the meantime, I’d like to shift into this new era of research by presenting a report of our most recent findings. As I am quite busy with highly important professor-ly things and the current CRUNCH-19 outbreak, I have once again given my unpaid interns the honor of writing the accompanying report.

This time we were tasked by Dr.Sakusaku to study the effects of Crunchberries on the human brain. While more pronounced side effects of consuming Crunch are well known (increased cholesterol, rises in sodium content in the bloodstream, spontaneous crunchatization, etc) very little was known about the influence Crunch has on the human brain. The details of the experiment are as follows:

A total of 100 participants were semi-randomly selected from a location as far away from Crunch Island as possible. All participants were screened for previous interaction with Crunch, and only those with no exposure* whatsoever were chosen. Those with a particular affinity to scientifically proven inferior cereals were preferred, most notably Corn Flakes, Corn Pops, and Fruity Pebbles.

*Determined based on our current measuring capabilities of Crunch.

For this experiment, three distinct versions of Crunchberries were used. To avoid confusion, each type has been given a designation that can be seen in the chart below. 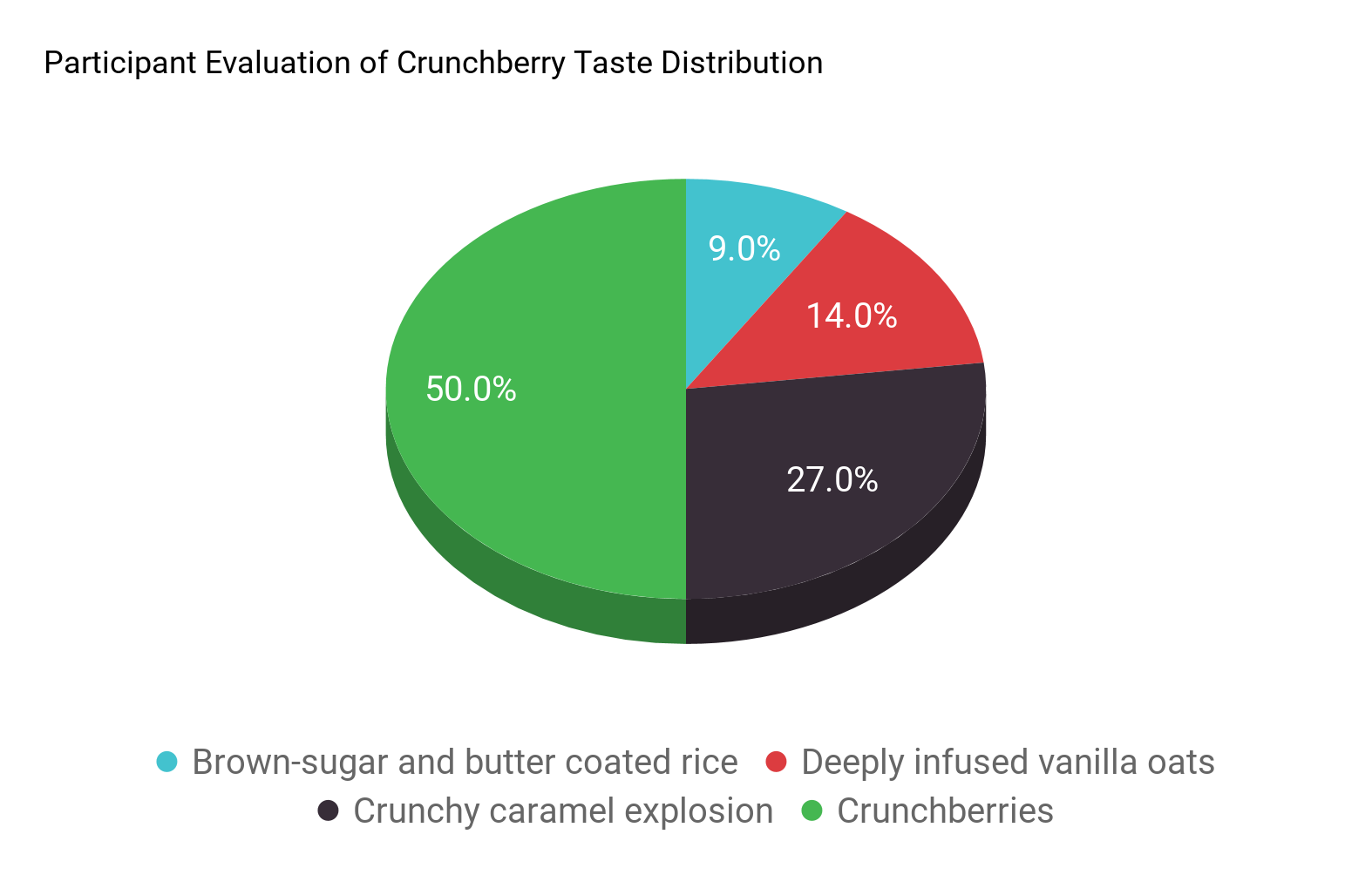 As you can see from the data, an anomaly is present: there were no responses among the participants that did not fall into one of these four responses. A pie chart without an “other” slice is unheard of in the scientific community! Yet another instance of the mystery of Crunch being beyond our comprehension. Additionally, a majority of participants described the taste of Crunchberries as “Crunchberries”. This could be the first evidence for the argument that Crunch should be added as a fundamental taste among the likes of salty, sweet, savory, etc.

After the participants had consumed the entirety of their bowl, they were each asked to perform a series of tasks all of which fell into one of four categories: Memory, Motor Skills, Creativity, and Social. They were then scored on a 100 percent scale based on how well they performed the tasks compared to their performance before consuming the cereal. The resulting score distribution can be seen in the chart below. 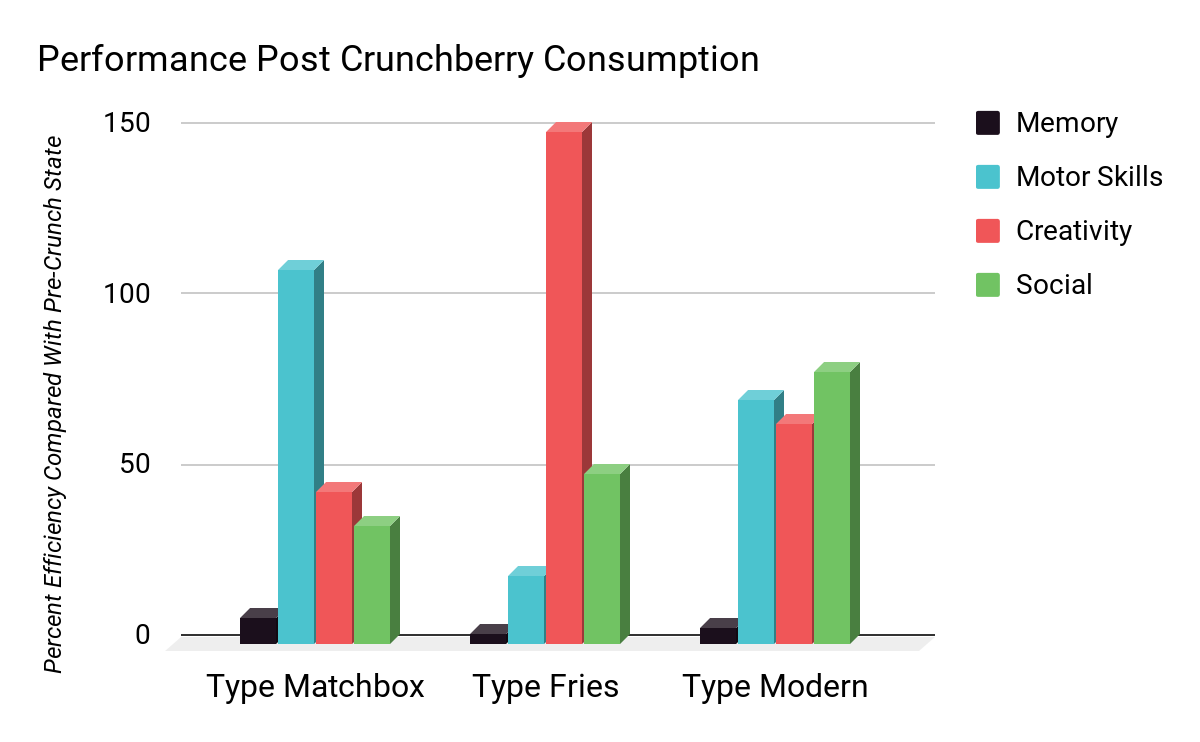 Across all types of Crunchberries, two trends have manifested. First, each type of Crunchberry performed particularly well in one category compared with the others. Each type’s best performing category, as well as a detailed analysis on each type’s results cAn bE sEEn in THe CHART bELoW!!!!

This type of Crunchberry caused participants to lose a significant amount of mental ability in exchange for a 10% increase in physical ability. Participants lost the ability to communicate ideas more complex than “bruh, I feel so yolked right now” and “let’s lift something”. Some outliers even saw a complete reduction in mental ability, reduced to exclusively producing caveman-like “unga bunga” speech.

This type of Crunchberry produced a stat spread not dissimilar to that of data collected from so-called “dank kush” trials. Participants who had consumed this cereal described themselves as:

“…baked as an oven! Wait, that doesn’t make sense….Wait, the oven isn’t baked, the oven DOES the baking. Bruh, I think I’m onto something here……wait….”.

Participants displayed reduced reflexes and motor skills after consuming the cereal, as well as a drop in social skill mainly due to inefficient and incomprehensible speech. However, participants experienced a whopping 50% increase in creativity compared with their pre-Crunch selves. The results of the test may indicate a hallucinogenic effect present within these Crunchberries.

The second trend that manifested as a result of these trials is that each type of Crunchberry produced a near complete reduction of memorization ability. This is especially strange when looking at the Type Modern Crunchberry, as every other stat hovered around the same level, and was fairly balanced. This makes the extremely low memory performance particularly significant. What we can conclude from this is that each type of Crunchberry has a static, negative effect on memory, with only negligible variations across types.

So what does this mean? While further research into this phenomenon must be performed, it is safe to say at this point that Crunchberries have an extreme effect on the hippocampus, the cerebellum, and the prefrontal cortex of the human brain. Anyone who consumes Crunchberries is at risk of memory loss or fever dreams.

This is of course a small price to pay for the absolute euphoria gained when eating Crunchberries. For the time being, there is no cause for alarm. We merely suggest performing frequent self-reality checks.

Dr. Shakipari Sakusaku is the founder of and leading expert on the still young scientific field of Crunchology and all derivative branches of the study of Crunch (Crunchography, Crunchemistry, Crunchtronomy, and Crunchmotology to name a few). He caused major wakes in the scientific community with his doctoral thesis entitled “The Correlation Between Milky Bowls of Crunch and the Milky Way Galaxy”, where he proposed a new multiverse theory that suggests Crunch as we know it may create new celestial bodies within bowls of milk that it is poured into.